In 2009, Kelly Grimaldi, the historian at St. Agnes Cemetery was spearheading a project to locate and identify all Civil War veterans interred at the 114-acre burial ground. Since starting the task ten years ago, the workers and volunteers have discovered 260 Civil War veterans in addition to the 262 they knew were buried there. Below you will find a database of all listings of Civil War Veterans interred at St. Agnes Cemetery. 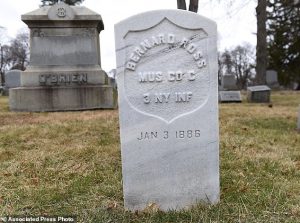 Headstone for “The Little Drummer Boy”

Workers found the faded and broken remains of the headstone for Private Bernard (Barney) Ross, an Albany resident who was just 12 when he enlisted in the Union Army in 1861. Ross, the eldest of six children from a family of Irish immigrants, became a musician, tasked with keeping the beat of a drum in time with the marching boots of soldiers in his company, and became known as the “Little Drummer Boy.” The young military drummer recently received a new headstone, shown here, to replace the damaged and broken one.

St. Agnes Cemetery has recently received the only known image of Private Bernard (Barney) Ross. It was discovered by a woman in Enfield, Connecticut who was going through some Civil War memorabilia collected by her late father. The picture of Ross – actually a tintype, taken on a thin tin plate – was one of two Civil War images taken in Albany found in the memorabilia. 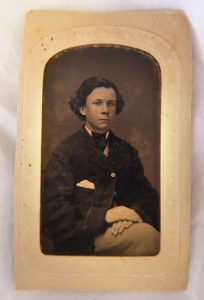