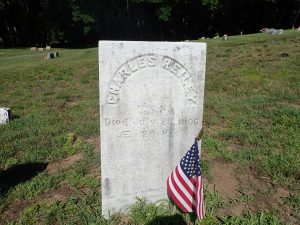 In 2018, St. Patrick’s Cemetery in Watervliet, NY (map) received a $5,000 Patriotism Grant from the Daughters of the American Revolution (DAR*) to restore the memorial headstones of veterans in the cemetery. Veterans, concerned citizens, and history buffs volunteered to assist the Albany Diocesan Cemeteries (ADC) in the restoration of approximately 700 markers and monuments in need of resetting, repair and cleaning. ADC Historian Kelly Grimaldi scoured the cemetery row by row, section by section searching for grave markers and headstones noting military service. Her survey revealed nearly 1,000 graves, approximately 500 of which needed to be reset and cleaned. Additional stones dating as far back as the Civil War were in need of resetting and cleaning, as many were illegible due to pollutants and position in the ground. Below is a searchable database of the veteran’s headstones cataloged in St. Patrick’s Cemetery.

* The National Society Daughters of the American Revolution was founded in 1890 to promote patriotism, preserve American history, and support better education for our nation’s children. Its members are descended from patriots who won American independence during the Revolutionary War.  With 178,000 members in approximately 3,000 chapters worldwide, DAR is one of the world’s largest and most active service organizations. The DAR grants program was started in 2010.  Funding is awarded to support projects in local communities which promote the organization’s mission areas of historic preservation, education and patriotism.  The DAR receives hundreds of grants applications each year, making competition high.