The record of deaths in this small, but interesting data series, was taken from the Appendix in the book “The History of Cohoes, New York, from its earliest settlements to the Present Time” written by Arthur Haynsworth Masten and published in 1877. 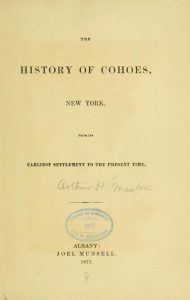 As indicated in the book, the information was taken from the columns of the Cohoes Advertiser, Cataract, Daily News, and the Troy Times. As typical of records of that time, the names listed are exclusively male.

Of particular interest are the numerous entries for Cohoes young men who died in the Civil War. The unit they were in is noted and in some cases the name of whose command they were under. Many identify the particular battlefield they were killed at. Some men are also listed as being held prisoner at Andersonville.

Another larger group of names cover the “movers and shakers” the men who were instrumental in creating the industrial might that Cohoes once had.

One prominent name mentioned in the records is that of Silliman. The Silliman Memorial Church, constructed in 1896, was a Cohoes landmark on the corner of Mohawk and Ontario Streets. Sadly, the City of Cohoes demolished the church in 1998. The site of the church is now an empty lot. More about Silliman and a church photo can be found at this link: http://www.lostlandmarks.org/silliman.html

Many of the records identify date and place of birth, education background and information on their marriage. In nearly all of the records, these men are remembered for their moral and religious background and the outpouring of grief in their community at their passing.

In some cases, there is an obituary, too long to include in the list below. These are indicated by * in record. You can locate the complete records online at https://archive.org/details/historyofcohoesn00mast/page/n10      (Appendix, pg 265)

Carolyn Oleyourryk and Bob McConihe  were the transcribers