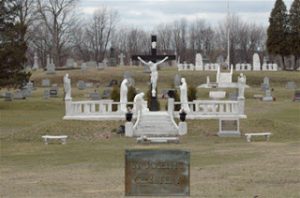 This data base of interments in St. Joseph’s Cemetery, Middletown Road, in Waterford, New York has over 17,000 records. As the cemetery was operated by the French speaking St. Joseph’s Church in Cohoes, the interments in this cemetery are overwhelmingly of French surnamed individuals.

St. Joseph’s Roman Catholic Church was the first French-speaking church in the Waterford area. The first plans for St. Joseph’s date back to 1867. St. Joseph’s Church continued to retain its French characteristics throughout the decades and celebrated special French-languages Masses. The church was permanently closed in February 2009. 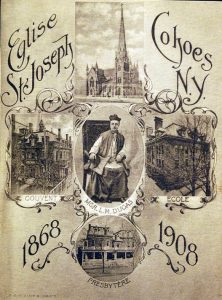 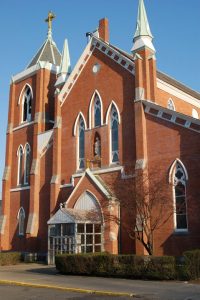 Cohoes was known as the “Spindle City” because of the importance of textile manufacturing which led to its growth in the 19th century. The Harmony Mills, completed in 1872, was the largest cotton mill complex in the world. 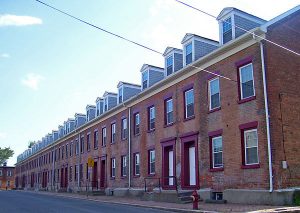 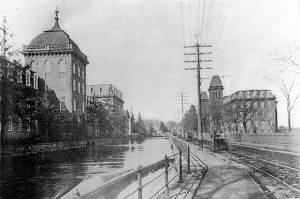 Because of the employment opportunities in Cohoes, numerous immigrant groups, especially French Canadians came to work in the city. In the 1830-1840’s, Mr. Jean Dalaire from St. Jean, Quebec, an employee of Wheeler & Sage, a contractor for the work on the Erie Canal, made three trips to Canada and recruited more than 300 French laborers. In 1880, 100 skilled weavers arrived in Cohoes from Lorraine, France to work in the mills.

A review of the Church records found over 700 interments in St. Joseph’s Cemetery that were NOT on the transcription file from the cemetery office.
Many of these newly identified records, which have now been added to this data base, were from the late 1800’s.

What is unique about these records from the 1800’s, is that names of “witnesses” to the death were reported. None of our previously transcribed cemetery records ever reported this type information. In many cases it was obvious from the surname that one or both of the witnesses had some family connection. One name in particular, a Marcel Duhamel, was the witness name reported for 43 of the deaths.

When French/Canadian genealogy groups were questioned on this practice, the following comments were offered:

1. This was a local government requirement that was practiced in many municipalities; the reason being that most people died at home and the witnesses were usually the family doctor and a relative of the deceased who was present at the time of death.

2. My guess is that the person who kept the records was following the format that has been used in French Canada since the early 1600’s as what we would consider vital records were kept exclusively by churches and not by a governmental agency.

The following listing identifies the various data elements which MAY be reported for each interment record:

1. LAST NAME – You may find slight variations in the spelling of some ofthe surnames.

2. FIRST NAME – Some names of parents are listed with the
French version of their name and at other times with the
English version. Examples, Guillaume (William), Edouard (Edward), etc.

3. MAIDEN NAME/RELATED TO – The maiden name for most of the
married women is reported in this data column. Also the family
relationship may be reported, (wife of, husband of, son of, daughter of,
aunt of, cousin of, etc.)

5. WHERE BORN – May show a foreign country, city and state or just
the state name.

6. DATE OF DEATH/DATE OF INTERMENT – In a few cases, these dates
may be off by a day or two.

7. ADDRESS AT TIME OF DEATH – Some records show just a street
address while others will show a city and state or just a state name.

9. PARISH – Burials in St. Joseph’s were from all over New York
State and even from out of state. The hometown Church Parish is
Identified which is of help to genealogy researchers.

10. CEMETERY SECTION/COMMENTS – Identifies cemetery section (A., B.,
C., Angel Ground, Polish Ground, etc.) and various comments on the
burial. This is where you will find the names of “witnesses” to the
death.