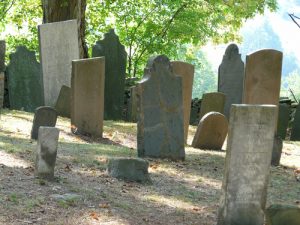 The old St. Mary’s Cemetery was located on Washington Avenue in Albany. Very little is known about this old cemetery but obviously it was run by St. Mary’s Catholic Church in downtown Albany. The original St. Mary’s Church was built in 1797 and that Parish is the second oldest Parish in New York State. So it is safe to assume that burials in this long closed cemetery would date to about the time of the founding of St. Mary’s Parish.

The disinterment from St. Mary’s Cemetery began around 1875 and the removal work was not finished until 1917. The closing of this cemetery coincided with the closing of many other family and church cemeteries in the Albany city limits.

Some of the factors contributing to the closing of these small local cemeteries were:

1. The urbanization of the city which made the land too valuable to put the dead in.

2. Concern about health issues. When people were embalmed originally, the morticians used arsenic and there was a feeling that the toxic arsenic substance would bleed into the water supply. The practice of using arsenic for embalming was banned in 1911. 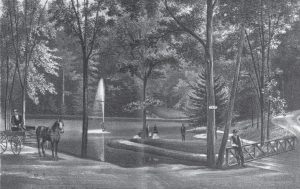 3. About the same time there was the new trend in making cemetery’s park like. Cities saw the rise of the landscaped cemeteries located outside of urban areas. 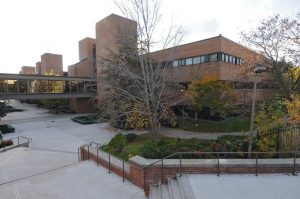 This was known as the Rural Cemetery Movement which presented an idealized view of nature. These new parks usually included rolling lawns, a water source such as a lake or pond, groves of trees, and recreations of picturesque architecture. All of it designed to recreate a peaceful, pastoral scene of beauty. Before the development of parks, the public was encouraged to visit and enjoy nature, art, and contemplation, and use the cemetery for outings such as picnics, carriage rides, or an afternoon stroll.
After St. Mary’s Cemetery was closed the land became the site of a small park later known as St. Mary’s Park. After World War II, the park was used as a site for temporary housing for returning veterans. Today the land formerly occupied by the cemetery is the site of the Albany High School.

Information on most of the names of the removals from this cemetery and location of where they were removed to has been lost over the years.However, detailed information on 910 of the removals that were later re-interred in St. Agnes Cemetery in Menands, New York, were preserved. These records which are now part of this data base will show the following information:

1. To read the history of St. Mary’s Church see the write-up in the
Church Memorials and Family Names section of the website.

2. For more information on closing of Albany area cemeteries see the
data base on the State Street Burial Grounds on the website.

For further information on this project please contact Bill McGrath at seamus@nycap.rr.com