Despite numerous inquiries, no records have been discovered on when this cemetery closed or to where the remains were removed. The only remaining symbol from the cemetery is a large concrete cross lying on the former cemetery grounds area which is now a student apartment complex for Hudson Valley Community College.  Previously, the grounds were the site of the Franciscan Monastery which acquired the property from the Burden family which owned the Troy Iron and Nail Factory Company 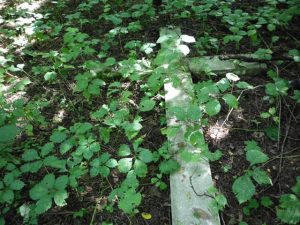 Concrete Cross on the Ground on Site of Abandoned Cemetery

The following description of the Troy Iron and Nail Factory Company explains that the complex was comprised of the factory and related building, extensive housing for the workers and the cemetery where many of the factory employees and their children were buried.

The purpose of the company, disclosed in the articles of incorporation, was the manufacture of bar-iron, steel, nail-rods, hoop-iron, sheet-copper, machinery, tools and implements.  The works are described in Spafford’s Gazetteer of the State of New York, published in 1824 “Among the manufacturing establishments of this town, the Troy Iron and Nail Factory claims distinguished notice.  It stands on the Wynantskill, in the 6th ward, 2 1/2 miles s. of the city, and is owned by an incorporated company, principally in Albany. These works embrace a rolling and slitting mill, a very extensive nail factory, sundry shops for other mechanical business, and about 50 houses, making a busy sequestered manufacturing village….  The Nail Factory is a stone edifice of great extent” 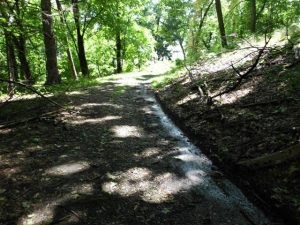 Roadway Leading To Site of the Abandoned Cemetery.

(NOTE: It will also be of interest to know that the 169th Regiment, New York Infantry organized in 1862 had a Company I principally recruited from Troy which was also known as the Nail Factory Company.)