Upon News of the Ending of World War I

This first hand account describing the wild celebration in Troy upon receiving word that the war was over is interesting from an historical perspective . The following letter written on November 21, 1918 by Mamie (Mary E.) Reilly to her brother Arthur is a quite moving. 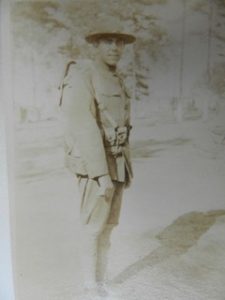 As can be seen from the record below, Arthur dies of pneumonia two days after the letter was sent and the letter was returned to sender marked “deceased”.

The war is over the sweetest words I have ever heard in some time. The bells and whistles sounds the glad news at half past three Monday morning.

I did not hear them at first until our doorbell rang. I jumped up to my feet to go to the door and as I opened the door I heard Mr. Peirce yelling, “Get up can’t you hear the bells ringing? Peace has been declared and the war is over.”

I could never tell you the feeling that came over me. At first I couldn’t believe him until I heard the city hall Bell ring 1776 and 1918 and every bell in the city rang and every whistle blew in tidings of great joy.

Anna came down stairs in her bath robe and down stairs the two of us went to get a cup of tea and dressed and out of the house at a quarter of four. They had a big bonfire at Franklin Square and kept it burning until after 12 o’clock last night. Everybody seemed to collapse and everybody seemed to be going crazy with joy and before four o’clock there was a parade started.

Kate Hubbard, Anna and I joined in the parade. In the start our music consisted of a couple of dish pans and everything that could make a noise. Ash cans played a big part. In every parade of which there were four yesterday. Well back to this parade again, little by little the parade grew and finally Doring’s band arrived on the scene and then a big American flag came in view and next our little Napoleon appeared on the scene and off we started singing and yelling and making all the noise we could. 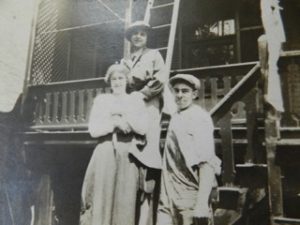 People ran to their windows in their nightclothes, waved flags, and cheered. Oh, Art I shall never forget it was the best morning that I have seen dawned in my life. We paraded for four o’clock until 7 o’clock. Came home and got some coffee and had a crowd here at the house. Lyda Law was here. She played the piano and we danced and sang all over the house. Bill was drunk at eight o’clock in the morning. We sure did celebrate and it was all the house.
This morning when we went to bed I stayed at Mary’s house all night and was not able to work today…….. (Couldn’t read)

We are anxiously waiting to hear from you people over there. I was going to send the

paper to you so you could read of our great demonstrations we had here in the city and everybody said there was delirium in Troy. I was also looking for a letter today but none came. In hopes there will be one tomorrow.

Well dear Brother, no one knows just how long they are going to keep you boys over there but here is hoping it won’t be long. With heaps of love and kisses your overjoyed Sister, Mammie

The envelope was returned, stamped deceased. 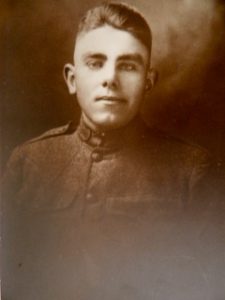 ARTHUR K. REILLY Member of Aero Squadron, Who Died Of Pneumonia in France DIED IN SERVICE Trojan in Aero Squadron Succumbs to Pneumonia

Sergeant Arthur K. Reilly, who enlisted in the Aviation Branch of Regular Army about a year ago, died of pneumonia in a hospital in France on October 23. Official notification of the death came to his brother, Frank Rielly (sic) of 612 Grand Street was sent to Kellyfield, Texas, when he enlisted and went overseas last spring. . He was attached to the Fourth Motor Mechanics, Sixteenth Company, Aero Squadron. Sergeant Reilly was a carpenter by occupation and belonged to the local Carpenters’ Union. He was an excellent baseball player on a number of local teams. He attended St. Peter’s Church and was a member of the Holy Name Society. Two brothers, Frank and William Reilly and a sister. Miss Mary Reilly, survive.

Another letter from Mamie (Mary E. ) Reilly
to her brother Arthur: Troy to France,
October 7, 1918

I have delayed a little in writing you, I have been on the go to much I guess. Saturday I went to the Arsenal Dance which was held in one of their new buildings before they put the machinery in. It sure was a dandy affair and I thoroughly enjoyed myself. They had an entertainment dance and refreshments and you had to be invited by someone who worked in the Arsenal. A fellow and his wife that dine over at Carmody’s took me to the dance. Was down to May’s house tonight and she read me a letter that she had wrote to you….

I told her it was about time she got a little pep in her. She said that she was ashamed that she hadn’t wrote to you before this. Art, have you heard anything about that new disease that is going around called the Spanish influenza, it sure is hitting people hard. Today, Jack Inglis, a onetime basketball player died at his sister’s home. I guess he has been in the service but was home on a furlough also Dr. Hueatis’ daughter died today with it and might say in the last week about twenty died around here from it. It is getting so bad that they are talking of closing theaters, schools and such places.

The student that rooms here has been sick since Saturday and we sure did think that he was going to have it. Had Dr. Green today said it was a very heavy cold and would be all right in a couple of days and to stay in bed which he is doing. Dr. Green said he never saw so much sickness, he is so busy out on cases he is afraid he can’t have any office hours.

I just sent you a record and am going to send you another tomorrow. I do hope you get them O.K. as they sure could give you the news better than I could.

The weather here has been terrible and we have looked forward to good warm weather this month but today was as cold as any day in November and the leaves are falling very fast. It will be no time before they are bare again and there is nothing left but thoughts of a dreary winter which is before us, but what of you boys over there miles and miles from home OH! what will there be for you boys? We should never kick when we think of you boys and still we do. We don’t realize I guess.

Newspaper talk looks very encouraging but what will it amount to no one knows. Buy surely it can’t last much longer but we have been saying that for a long time.

Friends from all sides ask for you and wish to be remembered and I will close hoping that there will be some word from you when the mail ship comes in. 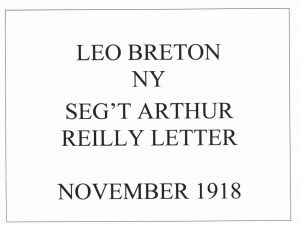 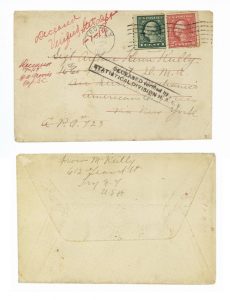 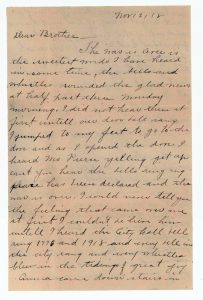 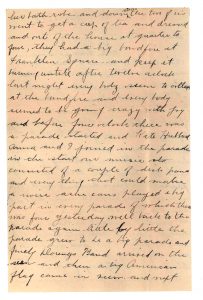 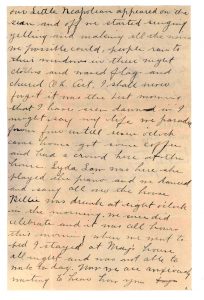 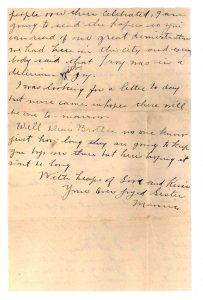