He was the son of Col. Levi Pawling, an officer of the American army. Col. Albert Pawling also joined the army as second lieutenant in a regiment commanded by Col. James Clinton and went to Canada, where he served under Montgomery in the fatal expedition of 1776. In 1776 he was appointed a brigade major under Gen. George Clinton. As such he served till 1777, when he was made a major in one of the sixteen additional regiments under Col. William Malcolm. 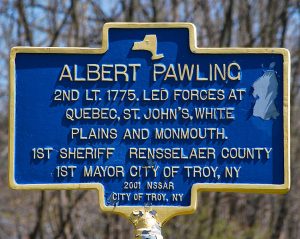 Pawling was a distinguished officer of the revolution, commanding a company of Swiss for the defense of the New York frontier. He was the first mayor of Troy, New York; and one of the first directors of the Bank of Troy. His brother, Henry Pawling, born April 22, 1752, appearing as lieutenant Nov. 21, 1776; he was taken prisoner at the capture of forts Montgomery and Clinton; was confined in the prison ships of New York harbor for two years; was released, and appears again as captain May 11, 1780, and again in 1783. His descendants are settled principally in Steuben County, N.Y.

Pawling Avenue in Troy perpetuates Albert Pawling’s memory in the city of his adoption.

NOTE: Death notice for Pawling was published in The Troy Daily Whig on November 11 and 14, 1837.