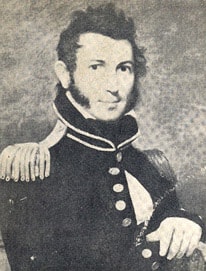 John Marshall Gamble was born in Brooklyn, New York in 1791 and died in New York City on September 11, 1836. Lieut. Col. Gamble was an officer in the United States Marine Corps during the early 19th century and he was the first and remains the only U.S. Marine to command a U.S. Navy ship, commanding the Greenwich during the War of 1812.

He was appointed Second Lieutenant on January 16, 1809. Holding the rank of Captain, he was stationed in the South Sea during the War of 1812 and distinguished himself in many enterprises, including encounters with people of the Marquesas Islands and sailing a seized ship with only a four-man crew and without benefit of a chart in a 17-day voyage to the Hawaiian Islands.

He was brevetted a Lieutenant Col. on March 3, 1827. The destroyer USS Gamble was named for him and his brother, U.S. Navy Lieut. Peter Gamble.

NOTE: Death notice for Gamble was published in The Troy Daily Whig on September 20, 1836.