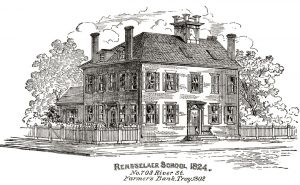 Moses Hale, MD, was born June 12, 1780 and died on January 3, 1837.
Doctor Hale began the study of medicine with Dr. Josiah Kitridge, of Walpole, New Hampshire and became a pupil of the celebrated Dr. Nathan Smith. In 1804 he came to Troy and having obtained his license on July 12th of that year, began practicing in the village.

In 1818 he, with Prof. Amos Eaton and Dr. Ira M. Wells, of Troy, perfected the incorporation of the Troy Lyceum of Natural History. At the first meeting of the association, Nov. 9, 1818, he was chosen, with Dr. I. M. Wells and Dr. Amatus Robbins, a curator. The Hon. Isaac McConihe, in an address on his life and services before the lyceum, said, “This was a position of great labor, requiring the greatest knowledge of science to superintend and preserve all the property, arrange in cases, name scientifically, and enter into proper books all mineralogical, botanical, and other specimens. Dr. Hale was the first to make a report, and the first who made a donation to the Lyceum of Natural History. Hardly a year elapsed from the commencement before it numbered among its members some of the most celebrated men now in the country, and the publication of its transactions were commented on and printed from one end of the country to the other. This was the first society of the kind in this country. The celebrity of this one brought into existence a thousand others.” Dr. Hale was one of the most ardent of its members and supporters, and at his death was its vice president. Several of his essays on scientific subjects are to be found in the transactions of the society published in the Ploughboy, a paper printed in Albany, at that time under the able management of Solomon Southwick.

Dr. Hale was deeply interested in the establishment in 1824 of the “Rensselaer School” (now the Rensselaer Polytechnic Institute), and was its secretary at the time of his death.

In his disposition, it is said, Dr. Hale was eminently social and generous. He attached no value to money for itself, but gave it freely with his services to all who were in want. His dress was dimple, his manners dignified and courteous, and in his treatment of his patients cheerful and decided. His style of living was plain, with the exception of his table, where he gratified a somewhat Epicurean taste.

Dr. Hale suffered from many years from an aneurysm of the aorta and hypertrophy of the heart, from which he died suddenly on Jan. 3, 1837.