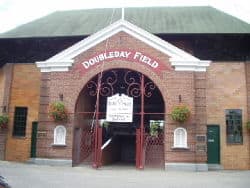 Phinney was the first printer in Cooperstown, New York and was considered a prominent pioneer and one who did much to advance the interests of Cooperstown. Phinney was invited to Cooperstown by Judge William Cooper, a wealthy land developer. It is said that future author James Fenimore Cooper, son of the Judge, frequented Phinney’s print shop. Caroline Cooper, the daughter of James Fenimore Cooper, married Phinney’s grandson, Henry Frederich Phinney.

In 1795 Elihu opened a printing and publishing business in Cooperstown printing the weekly newspaper “The Otsego Herald or Western Advertiser” which he published until 1813. His sons Henry and Elihu, Jr., took over the business in 1813 upon their father’s death. Both Henry and Elihu, Jr., held the office of Supervisor of the Town of Otsego (in which the Village of Cooperstown is located).

Elihu Phinney’s name may now be associated as much with the game of baseball as with the publishing business. It was claimed that Abner Doubleday, the supposed inventor of baseball, regularly played the game on Phinney’s farm. This led to the purchase of the lot for use as a baseball park now called Doubleday Field where the annual Hall of Fame Game is played.

Note: Death notice for Phinney was published in The Troy Post on August 3, 1813