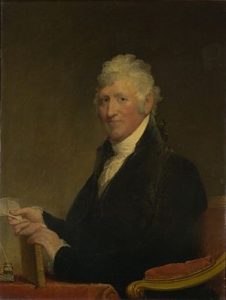 Gen. Humphreys was a Revolutionary War colonel and aide de camp to George Washington; American minister to Portugal and then to Spain, an entrepreneur who brought Merino sheep to America and a member of the Connecticut state legislature. A poet and author, he was one of the “Hartford Wits”.

Humphreys was born on July 10, 1752 in the First Congregational Church Parsonage, 37 Elm Street, Derby, Connecticut. He was the youngest of five children of the Rev. Daniel Humphreys and Sarah Riggs Bowers. As a boy, Humphreys was passionately fond of books. His father prepared both him and his brother, Daniel, for his own alma mater, Yale College, and entered both of them there. David was 15 years old when he entered the school and 19 when he graduated in 1771 with distinguished honors. Among his college friends were Timothy Dwight IV, who later became one of Yale’s great presidents; John Trumbull, poet and lawyer (not the artist); and Joel Barlow, poet and diplomat.

After graduation, Humphreys became principal at the public school in Wethersfield, Connecticut for two years. He then worked as a tutor for the youngest of the 11 children of Col. Frederick Philipse at the Philipse Manor house in what is now Yonkers, New York.

In July 1776, Humphreys enlisted in the Continental Army as a volunteer adjutant in the 2nd Connecticut Regiment, then stationed in New York. He later saw action in the battle following the burning of Danbury, Connecticut and in a later raid on Sag Harbor, New York. In that raid the Americans captured 90 prisoners, destroyed 12 enemy brigs and sloops, an armed vessel and an enormous quantity of stores, and returned to Connecticut without the loss of a single soldier. Humphreys was detailed to report the success directly to General Washington in New Jersey.

Humphreys died in his room at Butler’s Tavern in New Haven, CT on February 21, 1818 and was interred at Grove Street Cemetery, New Haven, Connecticut.

NOTE: Death notice for Humphreys was published in The Troy Post on March 3, 1818.