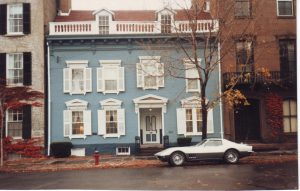 Jacob A. Swits, a descendant of the First Settlers of Schenectady, was born November 3, 1762 and died November 21, 1835 at the age of 76.
Gen. Swits was the son of Major Abraham Swits. He married Margarieta VanEps, daughter of Capt. Abraham VanEps on January 22, 1791. Their children were; Catharina, Abraham, Margarieta, Nicholas, Eva, Maria, Jane Helen, Jacob and Sally Ann.

In the Revolutionary War he was a private under Captain John Mynderse and a corporal under Captain Jellis J. Fonda, 2d Albany County Militia. In 1810 he was made Maj. General of the state militia.

General Swits house, circa 1790, at 19 Front Street in Schenectady is one of the Historic Buildings In Downtown Schenectady.

Note: Death notice for Swits was published in The Troy Daily Whig on November 27, 1835.