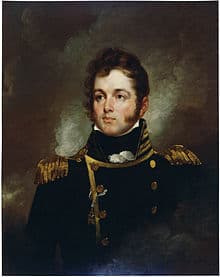 Served in the Continental Army during the Revolutionary War, was a physician and surgeon as well as a Judge. He was elected Chief Justice of the Court of Common Pleas, Washington County, Rhode Island and for many years was President of the Town Council of South Kingstown.

His most famous descendent was his grandson, the gallant Commodore Oliver Hazard Perry (1785-1819) who earned the title “Hero of Lake Erie” for leading American forces in a decisive naval victory at the Battle of Lake Erie. Also remembered is a famous line from his battle report; “We have met the enemy and they are ours”.

Freeman Perry died in South Kingston on October 15, 1813 at the age of 83 and is buried in the Perry Family Burying Grounds, South Kingston.

Note: Death notice for Perry was published in The Troy Post on November 16, 1813.