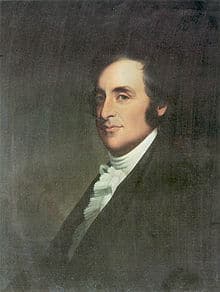 Samuel Dexter was born in Boston, Massachusetts on May 14, 1761 to the Rev. Samuel Dexter, the 4th minister of Dedham. He graduated from Harvard University in 1781 and then studied law at Worcester under Levi Lincoln, Sr., the future Attorney General of the United States. After passing the bar in 1784, he started practicing law in Lunenburg, Massachusetts.

He served for less than a year as he was appointed United States Secretary of War by President John Adams in 1800. Upon Secretary of the Treasury Oliver Wolcott, Jr.’s resignation in December 1800, Adams appointed Dexter as interim Secretary. He then briefly conducted the affairs of the War Office. He administered the oath of office to Chief Justice John Marshall. He returned to Boston in 1805 and resumed the practice of law. Was an unsuccessful candidate for Governor of Massachusetts in 1814 and 1815. The USRC Dexter (1830) was named in his honor. His son, Samuel W. Dexter was the founder of Dexter, Michigan. He died on May 4, 1816 shortly before his 55th birthday and is buried in Mount Auburn Cemetery in Cambridge, Massachusetts.

NOTE: Death notice for Dexter was published in The Troy Post on May 7, 1816.