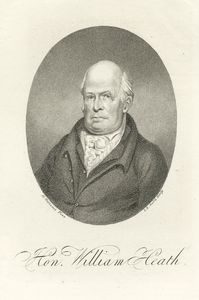 William Heath was born March 2, 1737 in Roxbury, Massachusetts and was raised as a farmer. In 1765 he joined the Ancient and Honorable Artillery Company of Boston where he became commander in 1770. In December 1774 he was commissioned a provincial Brig-general, was promoted to major-general on June 20, 1775 and two days later was commissioned fourth brig-general in the Continental Army. He became major-general on August 9, 1776.

After the war he retired to his farm in Roxbury. He was a state senator from 1791 to 1793 and in 1806 was elected lieutenant-governor of Massachusetts but declined to serve.

Heath, the last of the major generals of the Revolutionary War, died at the age of 77 on January 24, 1814 in Roxbury, Massachusetts.

NOTE: Death notice for Heath was published in The Troy Post on February 1, 1814.