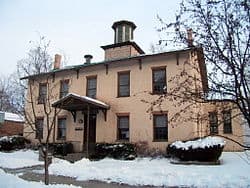 William was educated at Lansingburgh Academy and started his legal career in the office John Bird of Troy, N,Y.

McManus was married on February 24, 1805 in Greenbush, Rensselaer County to Catherine Coons, the daughter of Philip and Elizabeth Wheeler Coons. William McManus was a prominent lawyer in the Town of Brunswick & City of Troy, New York for many years. He served as justice of the peace, surrogate judge, district attorney and as a member of the House of Representatives in the Congress of the U.S. 1825 to 1827. In addition to his political activities William ran a brick yard, worked as a surveyor and farmed the “drowned lands” (wet lands) between the Villages of Eagle Mills & Clum’s Corners in the Town of Brunswick.

Note 1: The unusual middle name of Telemachus refers to a figure in Greek mythology, the son of Odysseus and Penelope, and a central character in Homer’s Odyssey.

Note 2: Death notice for McManus was published in The Troy Daily Whig on January 28, 1835.