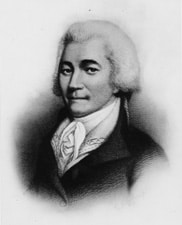 Isaac was born February 8, 1754 in Newark, New Jersey and died at the age of 84 on December 11, 1838 in Bennington, Vermont. He graduated from Princeton University in 1775 and moved for a short while to Schenectady, New York. In 1777, Tichenor moved to Bennington, Vermont and served in legislative, advisory, and judicial offices in Vermont for two decades. In 1791 he ran unsuccessfully for a seat in the U.S. House of Representatives against Matthew Lyon and Israel Smith, receiving 29% of the vote in the first round. He was in the U.S. Senate in 1796. He served there only briefly, as he was elected Governor of Vermont in 1797. He was the third and fifth Governor of Vermont. In 1807 he was defeated for reelection by Israel Smith. In 1808 he defeated Smith and remained governor until he was succeeded by Jonas Galusha in 1809. In 1815, Tichenor returned to the United States Senate , where he served until 1821. Tichenor was a member of the Federalist Party, though even when that party dominated the federal government in the 1790s, most other leading politicians in Vermont opposed it.

NOTE: Death notice for Tichenor was published in The Troy Daily Whig on December 13 & December 20, 1838.