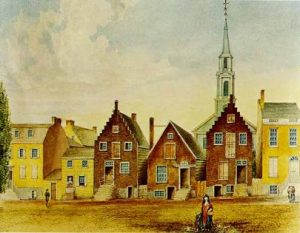 Jeremiah was born April 14, 1754, the son of Peter Lansing and Elizabeth Wendell. He was raised in a merchant’s house in the hear of Albany’s downtown business district.

In 1779, he entered the public mainstream when he was appointed firemaster for the first ward. He later served as an election inspector. In 1793, he was elected alderman for the third ward. In 1798, he was elected to represent Albany in the New York State Assembly.

On October 1, 1780, he married Helena Wendell at the Albany Dutch church where he was a lifelong member. By 1800, five children had been christened there. His family lived for a time on Market Street and by 1800 they had relocated to a comfortable home on what later became 80 North Pearl Street.

Jeremiah Lansing died in October 7, 1817 at the age of sixty-three. He was buried in the church plot of the Washington Park cemetery.

NOTE: Death notice for Lansing was published in The Troy Post on October 14, 1817.