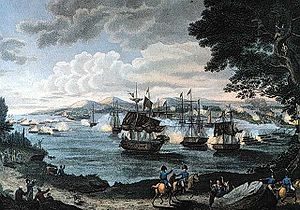 Peter Gamble was born November 5, 1793 in Bordentown, New Jersey and was an officer in the United States Navy during the War of 1812.

He was appointed midshipman on January 16, 1809 and served on Thomas MacDonough’s flagship “Saratoga” in the Battle of Lake Champlain. He was killed in action while in the act of sighting his gun on September 11, 1814. MacDonough deplored Gamble’s loss and commended his gallantry in action.

The USS Gamble was named for him and his brother, Lieut. Col. John M. Gamble who is also mentioned in the Interesting Biographies series.

Note: Death notice for Gamble was published in The Troy Post on October 4, 1814.