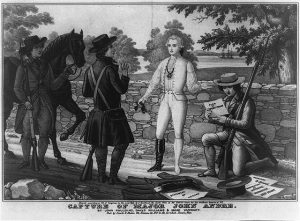 John Paulding, a self-sufficient farmer and a militiaman from the state of New York during the American Revolution, was born on October 16, 1758 in New York City.

He participated, along with fellow militiamen David Williams and Isaac VanWart, in the capture of Major John Andre at a site now called Patriots Park in Tarrytown, New York. Holding him in custody, they discovered documents of André’s secret communication with Benedict Arnold. The militiamen, all local farmers of modest means, refused his considerable bribe and instead delivered him to the Continental Army. Arnold’s plans to surrender West Point to the British were revealed and foiled, and André was hanged as a spy.

Paulding married three times in his life and was the father of nineteen children. Paulding’s descendants are numerous but perhaps the best-known is his son Hiram Paulding (1797- 1878), who served in the War of 1812 and fought in the Battle of Lake Champlain. He became a Rear Admiral in the United States Navy and retired only after the end of the American Civil War.

Upon George Washington’s personal recommendation, the United States Congress awarded Paulding, Williams, and Van Wart the first military decoration of the United States, the silver medal known as the Fidelity Medallion. Each of the three also received federal pensions of $200 a year, and prestigious farms granted by New York State. Streets named after Paulding will be found in Tarrytown, Cold Spring, Elmsford, Peekskill and White Plains, all in New York State. Paulding’s name is memorialized. Additionally Paulding County in Ohio and Georgia memorialize Paulding’s name.

John Paulding died on February 18, 1818, at the age of 59 years, 4 months and 2 days, at Staatsburg, Dutchess County, New York of natural causes. He is buried in the Old St. Peter’s Church cemetery in Van Cortlandville, Cortlandt Manor, NY. The grave is marked by a large marble monument with the epitaph: “FIDELITY – On the morning of the 23rd of September 1780, accompanied by two young farmers of the county of West Chester, he intercepted the British spy, André. Poor himself, he disdained to acquire wealth by the sacrifice of his country. Rejecting the temptation of great rewards, he conveyed his prisoner to the American camp and, by this noble act of self-denial, the treason of Arnold was detected; the designs of the enemy baffled; West Point and the American Army saved; and these United States, now by the grace of God Free and Independent, rescued from most imminent peril.”

NOTE: Death notice for Paulding was published in The Troy Post on March 10, 1818.