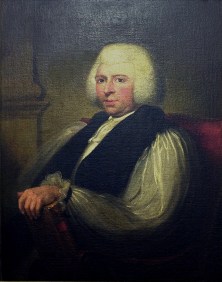 Samuel Provoost was born in New York City, of Huguenot descent, in 1742. He was educated at King’s College (now Columbia) and continued his studies at St. Peter’s College in Cambridge, England. Was ordained a priest in 1766.

On his return to New York City, he became an assistant minister of Trinity parish, a post he held until 1774 when he withdrew. Although he declined to serve as a delegate to the Continental Congress, his patriotic zeal led him to join his neighbors in pursuit of the British after the burning of the town of Esopus.

After the end of the Revolutionary War he resumed his active ministry and in 1784 he became Rector of Trinity Church, New York City and in 1785 he became chaplain of the Continental Congress then meeting in New York City. In 1786 he was elected first Bishop of the Episcopal Diocese of New York at the Diocesan Convention and he was consecrated in England.

NOTE: Death notice for Provoost was published in The Troy Post on September 12, 1815.