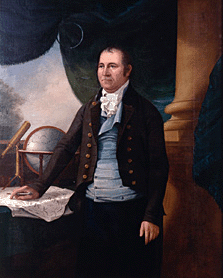 Simeon was one of 14 children of Physician Dr. Andries DeWitt and Jannetje Vernooy DeWitt. He was the only graduate in the class of 1776 at Queens College (now Rutgers College of Rutgers University in New Brunswick, New Jersey). After the capture of New Brunswick by the British during the war, DeWitt fled to New York City where he joined the Revolutionary Army.

In 1780, DeWitt was appointed to his post as Geographer and Surveyor of the Army and in 1784 he was appointed New York State Surveyor General where he died in office 50 years later. Although he was a first cousin of DeWitt Clinton and a Democratic-Republican, he was never removed from office. Both Federalists and Bucktails recognized his outstanding qualification for the office. Form 1810 to 1816 he was a member of the first Erie Canal Commission.

DeWitt was married three times. In 1789 he married Elizabeth Lynott (1767-1793, daughter of Thomas and Elizabeth VanValkenburgh Lynott), and they had two children. In 1799 he married Jane Varick Hardenbergh (died 1808, widow of Abraham Hardenbergh (1756-1794) and sister of Richard Varick). Their son Richard Varick DeWitt became a prominent civil engineer.) His third marriage was to Susan Linn
NOTE:Death notice for DeWitt was published in The Troy Daily Whig on December 10, 1834.