Stephen Jeremiah Hogeboom was born August 16, 1744 to Jeremiah Pieter Hogeboom and Jannetje VanAllen. He was married to Heletje Muller. The Hogebooms were early and important members of the Claverack settlement. During the American Revolution he was a Lieut. Col. in the Albany County 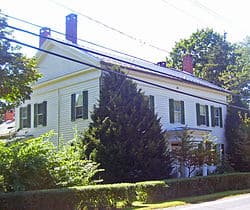 Regiment under his cousin, Col. Peter VanNess, who built Lindenwald. Stephen was one of the most prominent jurists of the day and an ardent patriot. Records show that he and his brother-in-law, Thomas Storm, presented a sloop of flour to the Contenental Army in 1776.

Stephen was active in local politics. He served as Claverack’s town supervisor in the late 1780’s, and ex officio on the county’s Board of Supervisors. He also was in the state legislature as both an assemblyman and state senator. His son, Killian, was in charge of the post-office station in Claverack after the Revolution.

The Stephen Hogeboom House is located on NY 23 B in Claverack, New York. It is a frame Georgian-style house built in the late 18th century. It was listed on the National Register of Historic Places in 1997.

Note: Death notice for Hogeboom was published in The Troy Post on April 26, 1814.