To the Board of Supervisors of Rensselaer County: “I have the honor to transmit for information of your honorable board my annual report for the year ending November 21, 1897, for the burial of indigent soldiers, sailors and marines and furnish headstones for the same for the county of Rensselaer.”

The majority of names in this record series (below) will show the following information for the listed names: Rank & Regiment, Date of Death, age, last residence, undertaker, cemetery and name of applicant. 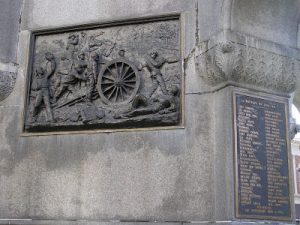 The base of the Soldiers and Sailors Monument, located in in Monument Square, at Broadway and 2nd Street, supports four bronze relief plaques representing the cavalry, infantry and artillery branches of the Union military service and a fourth plaque representing the naval battle between the Monitor and Merrimac. Atop the tall granite shaft is the bronze statue titled “Call to Arms” by New York sculptor, James E. Kelly (1855-1933). Kelly was a leading illustrator and sculptor of Civil War scenes and the creator of many monuments throughout the country.