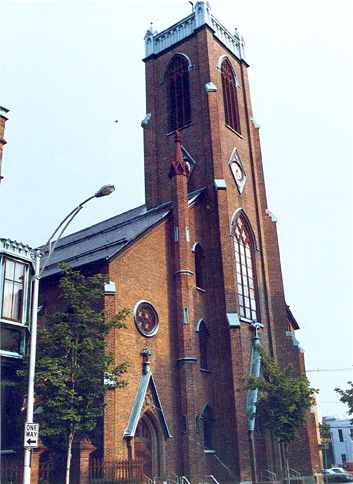 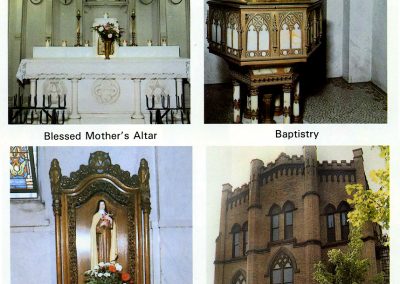 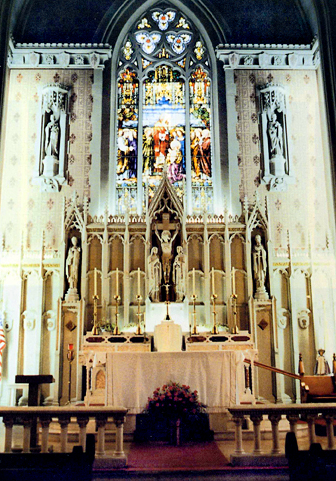 In 1824, St. Peter’s Roman Catholic Church was the seventh religious society organized in Troy. The first services of this congregation in 1825 were held in a school-house on the south-east corner of Second and Ferry streets. Desiring to erect a suitable house of worship, the members of the church, on June 22, 1826 made an appeal to the people of Troy for aid in building such an edifice.

On or about October 28 th that year, John D. Dickinson and several other grantors conveyed for consideration of “six cents” lot 214 on the north-east corner of North Second and Hutton streets. The conveyance stipulated that the ground was “for the use and purpose of having a meeting house built and forever continued” on it and “also that a clock and bell should, within a reasonable time after the building of the first meeting house, be placed, put and continued thereon,” and in case these conditions were not fulfilled, “the property was to revert to the grantors.” Recently, a similar provision affecting the Woodside Presbyterian Church in Troy resulted in the building reverting to heirs of the Burden family and the land reverting to heirs of the Corning family.

Shortly afterwards a small weather-boarded church was begun on the lot. On completion of the building in 1830, the Right Rev. John Dubois, Bishop of New York consecrated it. Some years later the church was enlarged by a brick addition which increased its length to eighty feet. About noon on Tuesday February 10, 1848 the church was destroyed by fire caused by sparks from a stove pipe.

The existing large brick church structure, with its finely proportioned clock-tower and steeple now occupying the site of the burned structure, was erected in 1849 and was dedicated on December 16 th that year by the Right Rev. John McCloskey, Bishop of Albany. The plans of St. Peter’s were by Patrick Charles Keely (Kiely), from Thurles, Tipperary, Ireland who was the foremost student in this country of Gothic architecture. The Cathedral of the Immaculate Conception in Albany and St. Joseph’s Church in Albany are also Keely designed churches. Peter Finnerty of Troy was the builder of St. Peter’s.\

The following Memorial Names that were found in St. Peter’s Church were transcribed by TIGS volunteer Maureen Noonan.