On Sunday, Nov 10 at the Troy Public Library, hear Michael Barrett, Director of the Hudson Mohawk Industrial Gateway tell you the true story of Troy’s Draft Riot of 1863. 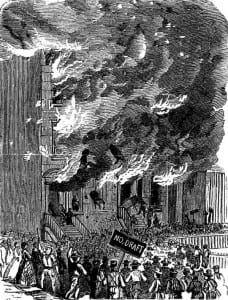 While the city of Troy was a bustling industrial center during the civil war period, the lives of her workers reflected the same social, financial and emotional upheaval that had torn the nation apart.  Local economic and political disparity had led to the early and successful organization of labor, and related political affiliations.  These factors were compounded by the enactment of the first military conscription act in American history, which included provisions that many considered to be onerously weighted against the laboring class. This turmoil led to what has been called the second most destructive draft riot in the nation, necessitating some rather unusual governmental responses.

Preceding Michael’s lecture we’ll have a brief meeting of TIGS with status of current projects.