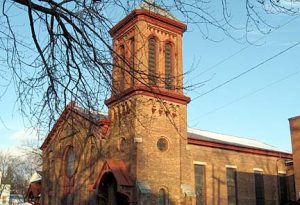 The First Presbyterian Church of Lansingburgh was incorporated August 9, 1792 and is one of the oldest churches in Troy. The church, which was built of brick brought over from Holland, was dedicated on June 22, 1794.  Rev. Jonas Coe, D.D. was the Church’s first pastor, later to become principal of Lansingburgh Academy in 1796.