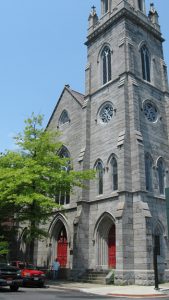 The congregation of Christ Church is a church with a long history and can trace its roots back to the first community of Methodists in Troy which began holding meetings in 1793. From that group, the State Street Methodist Episcopal Church was formed in 1808.

In 1871, the Methodists of State Street had outgrown their second building, a large brick structure built in 1827 and a new church was designed and constructed. Gothic in design, the structure was completed and dedicated on March 30, 1871 by Bishop Matthew Simpson. The new building, with seating for 900, was constructed of blue limestone and is today one of the more beautiful churches in Troy. Its imposing steeple reaches 175 feet from the sidewalk to the finial. The cost of the new building was $125,000, a staggering amount for its day. Architects for the new church were Woollett & Ogden. 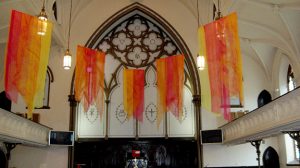 Many of the “holy relics” of the Trinity Methodist Church were transferred from that building and integrated into the State Street building. An entire chapel was constructed using the sacred objects from the Trinity church building.

The following Memorial Names that were found in Christ Church United Methodist were transcribed by TIGS volunteer Rebecca Rector.