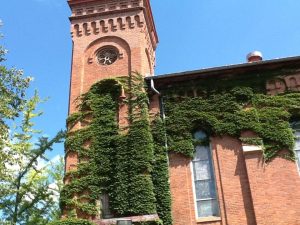 The Baptist Church building at Fifth Avenue and Fulton Street in Troy has been home to various different congregations over the years.  Currently this is the home of the Victorious Life Christian Church.

The North or Fifth Avenue Baptist Church began on June 6, 1843 with 57 members from the First Particular Baptist Church. The church was burned in 1852, rebuilt, and then burned again during the Great Fire of 1862.   It was again rebuilt in 1863 and the building still stands today. The building measures 92 feet by 67 feet has 11,000 square feet of space with a seating capacity of 300. The 133 feet high tower contains a bell weighing 2500 pounds.

NOTE: See the LOCAL HISTORY section of the website to read all about the Great Fire of 1862. 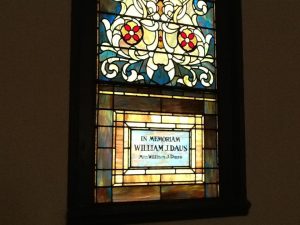 In 1991 the St. John’s Lutheran Church building (formerly the Baptist Church) at Fifth Avenue and Fulton Street was purchased by a local Church, Troy Christian Community, a small charismatic house Church, for $90,000. At that time the Church name was changed to Victorious Life Christian Church.

The following Memorial Names that were found in the old Baptist Church building were transcribed by TIGS volunteer Rebecca Rector.

If anyone is interested in helping on a similar project,