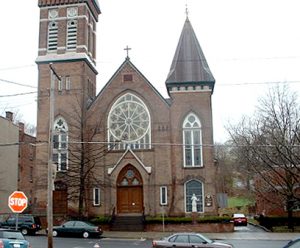 The fifth Roman Catholic congregation in Troy, organized in 1861, was originally given the name of Holy Trinity Church. The cornerstone of the church, which the congregation began building in 1862, on the west side of 15th street, between Christie and Marshall Streets (a few blocks from the later location), was laid on Sunday afternoon, August 3, by the Very Reverend John J. Conroy, vicar general of the diocese.

The edifice was dedicated in June 1863 under the name of St. Francis Church. The current brick church on the south side of Congress Street opposite Thirteenth Street (at the entrance to Prospect Park) was erected in 1881, and opened for services on Sunday April 9, 1882.