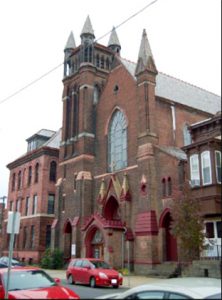 On October 15, 1859 a group of German-speaking Roman Catholics gathered at St. Mary’s Parish Hall in Troy and celebrated Mass in the German language, led by Fr. Metinger, a priest from Europe.

Eighty-three persons continued meeting with a view to forming a parish for German-speaking Catholics. Under the leadership of Bishop Conroy, St. Lawrence Parish for German-speaking persons was established in 1868. For brief periods of time the small community worshiped in Lutzelberger’s Hall, St. Mary’s Parish and St. Jean Baptiste Parish. On September 4, 1870, the cornerstone was laid for a small wooden building which served as the church and later as the first parish school. On May 20, 1883, the cornerstone was laid for the present church structure and on May 11, 1884, the building was formally consecrated. 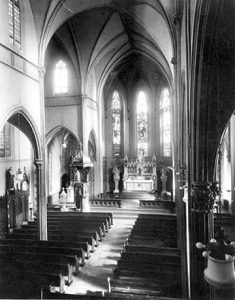 The following photographs are all connected to St. Lawrence’s, Church, School and Parish Community. 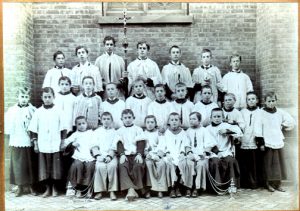 St. Lawrence Church was permanently closed on September 26, 1987 and the parish joined with St Joseph’s in South Troy. In preparation for the closing of St. Lawrence, Albany Bishop Howard J. Hubbard asked parishioners Jack Reilly and Ms. Hynes to “represent the parish as acting trustees and to work with” the Diocesan Chancellor “for the disposition of both the church and rectory buildings.” Thanks to the prominent role Mr. Reilly played in the disposition of the parish possessions and his retention of those records for more than 22 years, it was possible to build a database of memorial names for this long closed Catholic Church.  Several boxes of other records were saved and are in the collection of the Rensselaer County Historical Society, including some parishioner records.

As of early 2018, the building was scheduled for demolition.

The following listing of Memorial Names connected with St. Lawrence Church, as well as some history of the Parish, was developed from data provided by Jack Reilly and his cousin Lynn Carey Grice.