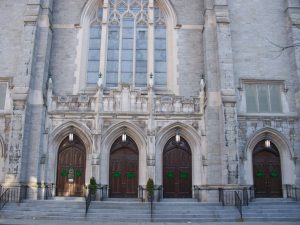 St Patrick’s parish sacramental records are housed at St. Anthony’s Church in Troy. Luckily for genealogy researchers the bulk of St. Patrick’s records have been published by the American-Canadian Genealogical Society of Manchester, New Hampshire. Copies of the books are at the Troy Library and look-ups are available through TIGS volunteers by sending a request to our email list. The marriage books cover 3,917 marriages from September 1872 to July 2000. The baptism books have 11,493 baptisms from September 1872 to April 2004. The burial books have 4,815 burials from July 1919 to April 2004. Burial records prior to 1919 were destroyed in the 1940 fire.

The following short history of St. Patrick’s Parish will be of interest. In November 1871, Albany’s Bishop Conroy created St. Patrick’s parish and the Reverend John Joseph Swift was put in charge of it. The first church building was a weather-boarded church erected on the west side of Sixth Avenue between Ingalls Avenue and Douw Street in 1872. Mass was celebrated for the first time on the first Sunday in September of that year.

Ground was broken for the second (and present) church on April 2, 1912. This ecclesiastical masterpiece was designed by M. F. Cummings & Sons, Troy architects. Inside this magnificent structure you will find stained glass windows from Austria, a ceramic mural over the main altar, Tiffany chandeliers, Carrara marble statues and altars and a cross carved by Lang, the celebrated wood carver from Oberammergau, Germany. The Austin organ from Hartford, Connecticut is one of the largest and finest organs north of New York City. The inaugural recital in 1925 was played by the world famous Belgian organist of Antwerp Cathedral, Charles-Marie Courboin, who became organist of St. Patrick’s Cathedral.

The twelve chime bells installed on December 6, 1915, were made by the famous Clinton Meneely foundry on lower River Street in Troy. However, the bell summoning worshipers to mass for the last 134 years is the original bell from the first St. Patrick’s Church. It was made by the Jones Bell Company on Adams Street, Troy in 1876

The following Memorial Names that were found in St. Patrick’s Church were transcribed by TIGS volunteer Gerri Sherry.