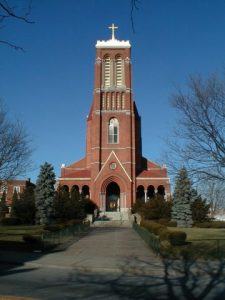 St. Patrick’s Roman Catholic church was established in 1840 in the village of West Troy, now the city of Watervliet, NY. It served a predominately Irish immigrant population. The original St. Patrick’s was a brick building at the corner of Union and Burlington streets (presently, Twenty-third Street and Fourth avenue). Despite the establishment of another parish in the southern section of the community in 1855, the congregation’s continued growth necessitated the construction of a larger worship site.

Father William F. Sheehan, pastor of the parish from 1868 until his death in 1909, was the driving force behind the new church building. A large parcel of land on Nineteenth street between Fifth and Sixth avenues and encompassing nearly two square blocks, was obtained for the new structure. (The original worship site, which still stands, was later used as a church hall and school building, and eventually became home to the Our Lady of Mount Carmel Roman Catholic congregation.) 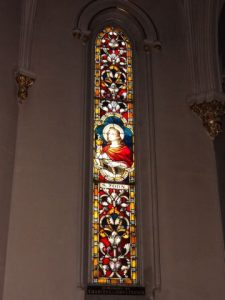 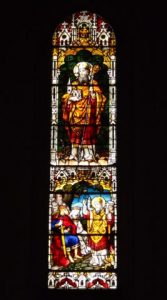 Fr. Sheehan had traveled to Europe in 1879 and while there became entranced by the recently completed Basilica of the Immaculate Conception or, “Upper Basilica”, at Lourdes, France. It was designed in the neo-Gothic style and constructed between 1866 and 1872. Working with Troy architect Edward W. Loth, the new St. Patrick’s church was a replica of that basilica. The cornerstone of the new 1800 seat building was laid on July 4, 1889. The first mass was celebrated Christmas day, 1891.

Originally intended to be built of dressed stone, as was the Lourdes basilica, a stonemason’s strike imperiled timely construction and a decision was then made to construct St. Patrick’s with a brick facade. The bell tower, which is 137 feet tall, was intended to feature a spire, but that phase of construction was not completed. A huge bell, weighing 7500 lbs (nearly 10, 000 lbs mounted) and cast by Meneely & Company of Watervliet was installed. It was first rung on Easter Sunday, 1907. The church has an unusual feature, a loggia (an external covered porch) instead of a vestibule, something rarely seen in American church architecture. 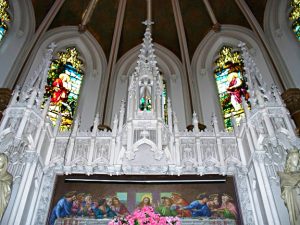 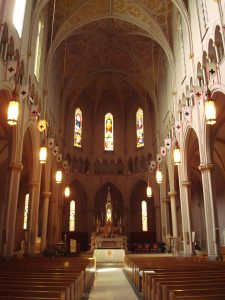 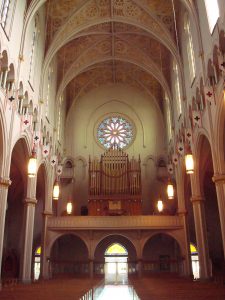 The interior of the church, with a 60 foot high nave, featured 56 stained glass windows, installed at various times between 1891 and 1948. They include windows by the noted firms Mayer of Munich and James Powell & Sons, Whitefriars, London.

In 2012, the Roman Catholic Diocese of Albany decided to close the church, citing physical deterioration of the building. Despite local efforts to save St Patrick’s Church from being demolished, this beautiful church fell to the wreckers in April and May 2013. The bell tower, the last standing section of the church, required bringing in larger cranes before it too was reduced to a pile of rubble, while the 6,800 pound Meneely bell was subsequently moved to a ground level pavilion in front of the Watervliet Historical Society. A Price Chopper supermarket was constructed on the former church site and opened in July 2014.

Special thanks are owed to Julie L. Sloan, of North Adams, MA, Consultant in Stained Glass, for providing detailed information on the wonderful stained glass of this church.

The following Memorial Names that were found in the church were transcribed by TIGS volunteers Stanton M. Broderick and Michael McAlonie. Broderick also provided the above history of St. Patrick’s Church.