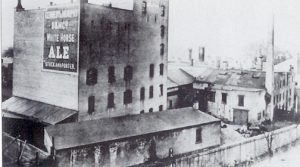 The brewing of beer in Troy, it would seem, began as early as 1793, in a brewery belonging to Colonel Stephen J. Schuyler. The first established of the nine now in the city is that of Kennedy & Murphy, on Ferry Street, east of Fifth Avenue. On a part of its site Charles Hurstfield and Thomas Trenor erected a small brewery in 1809. In 1823, Read & Armstrong purchased the property. Their successors were Read, Armstrong, & Co., 1832; Read & Son, 1837; M. P. Read & Brothers, 1841; Read & Brothers, 1847; Arba Read, 1856; Read Brothers, 1857; Dunn & Kennedy, 1867; and Kennedy & Murphy (William Kennedy and Edward Murphy, jr.), Novembr 1st, 1867. The extensive brick buildings of the Excelsior Brewery, on the south of Ferry Street, are fitted with all the modern inventions and conveniences for malting and brewing ale and porter. 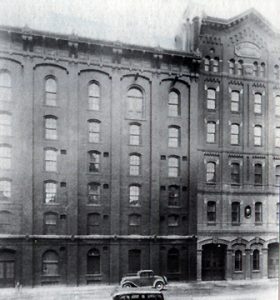 The Garryowen Brewery, on the west side of River Street, between Hutton and Hoosick streets, covers nine building lots. The malt-house and the brewery-house, two imposing brick structures, six stories high, were severally buillt in 1877 and 1881. Each is provided with the latest improved machinery and apparatus for making ale and porter. 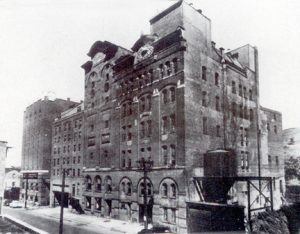