I wonder if anyone on the Rensselaer County List or the Troy Irish Genealogy List remember Dave’s Grill? Dave’s Grill was on 5 Cross Street just up from another well known Troy grill, The Snuggery Inn. Cross Street, for those not familiar with Troy streets, is the side street near Marty Burke’s South End Tavern. Owners were Dave Dufty, who was born in England and died in Providence, Rhode Island on April 6, 1961 and his sister-in-law, Mary C. O’Connor who died in Troy on October 12, 1963. Dave was married to Julia O’Connor. Mary and Julia were sisters to my grandfather William O’Connor and were my great aunts. 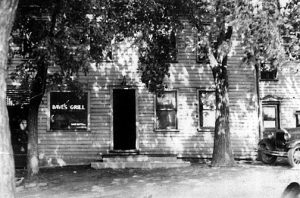 The grill, which was open for about twenty years, was attached to the side of the O’Connor family home. My great grandparents were Timothy O’Connor, born Nenagh, County Tipperary, Ireland, and his wife Catherine McCormick O’Connor born in Dunbin, County Louth, Ireland. They lived at Cross Street from the 1870’s until their deaths in 1912 and 1923. My mother, Mary Elizabeth O’Connor McGrath, even lived at Cross Street with the extended O’Connor family for her first few years until her parents, William O’Connor and Mary Carroll O’Connor moved behind the Cross street house onto Burden Avenue. My mother spent the rest of her life at 739 Burden Avenue and when she married James McGrath the boy next door at 741 Burden Avenue, they lived all their married life on the second floor of 739 Burden Avenue.

Dave’s Grill was a popular spot for families on a hot summer night. Cars would park all over the road in front of the grill and the wife and kids would sit in the car while the husband went into the grill to get drinks. He would come out of the grill carrying a beer tray of drinks and perhaps a small box (not bag) of the old time Blue Ribbon potato chips. Does anyone remember them? The parents would sit in the cars and enjoy their drinks while the kids would play games on the quiet back street. As kids ourselves we would join in and play hide and seek, etc. with the children. There would literally be dozens of cars parked there with everyone sitting in their cars enjoying the hot nights.

As children we would leave our house on Burden Avenue and walk through our back yard to go visit Mary O’Connor, who was my great aunt Mame, and her brother Charlie. If we wanted soda from the bar there was a small passageway with a telephone that led to the bar. You had to knock on the door with a coin and eventually a bar tender would come to the door and take your order. As kids we would sometimes bring a bucket to get beer for our McGrath grandparents who lived next door to us on Burden Avenue. My grandfather, Thomas McGrath and his wife Nora Kennedy McGrath, both from Thurles, Tipperary, Ireland would enjoy their beer with friends from Ireland, sing songs like the Maid of Sweet Carew and have a good cry in their beer.

I imagine it was a hard life in the O’Connor homestead. There was no hot water, no refrigerator only a ice box and there was no central heat. In the cold weather, Charlie would have a coal fire in the stove in the sitting room where Mame presided in her rocking chair alongside a large table which was under a large colored glass dome. As the night wore on Charlie would heat bricks on the stove which would then be carried up to warm the beds in the unheated upstairs rooms. If we got a little rambunctious, Mame would give us a warning that “Charles will give you the gate” so we then would quiet down. The O’Connor home and Dave’s Grill has been torn down for over forty years now but I still have a vivid impression of the buildings and the good times we had there growing up. One memento I still have from the building is a photograph of the Burden Water Wheel when it was a ruin and most likely being dismantled. I found this photo in the O’Connor home. 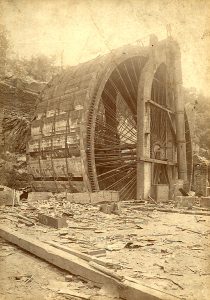 This photo seems to be a picture of the Water Wheel when it was being torn down. Photograph was found in the house of my great grandfather, Timothy O’Connor, on Cross Street in South Troy. Photograph was in a old dresser on the second floor over Dave’s Grill which was in one half of the O’Connor family home. 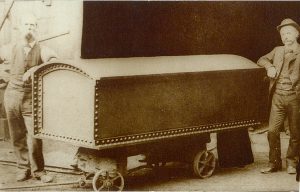 This photo has been reported to be Burden Iron Company workers with a steel burial vault made for the funeral of President Grant. My brother-in-law, Joseph J. Galusky (1924-2004) showed me this picture many years ago and told me the story about the vault and it’s connection with President Grant. He gave the photograph to my cousin John Clinton of Troy, who still has the original.
All of my O’Connor’s as well as my McGrath’s worked at the Burden Iron Company.
Timothy O’Connor was born December 1836 in Nenagh, Tipperary, Ireland
and came to Troy in the 1870’s. He died in Troy on August 8, 1912.

Timothy and his three sons all worked at Burden Iron. The sons were: