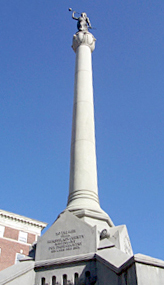 The Rensselaer County Soldiers and Sailors’ Monument Association, organized “to secure a site and erect thereon a suitable monument in honor of and to perpetuate the memory of the soldiers and sailors who went from Rensselaer County, State of New York, into the late war of the Rebellion, and who fell in the defense of their country, or who died later, or shall die in the enjoyment of the fruits of victory achieved,” was incorporated November 12th, 1886. On November 29th, Colonel Charles L. MacArthur was elected president of the association, Major-General Joseph B. Carr, vice-president; William Kemp, treasurer; and Arthur W. Bradley, secretary.

Washington Square having been selected for the site of the monument on August 1st, 1887, the city subsequently conveyed to the association a title to the ground. The Legislature in 1889, authorized the Supervisors of Rensselaer County to appropriate $25,000 toward the erection of the monument. On August 7th, that year, the design offered by Fuller & Wheeler, architects, Albany, was accepted, and on February 24th, 1890, a contract to erect the monument was awarded Frederick & Field, of Quincy, Mass.

On Decoration Day, Friday, May 30th, that year, the corner-stone was laid by Colonel Charles L. 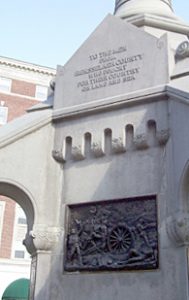 MacArthur, the president of the association, who delivered an historical address, in which he particularized the notable bravery and laudable records of the men of Rensselaer County, who took part in the Civil War. Speeches were also made by the Rev. Peter Havermans and the Rev. J. W. Thompson. The occasion was made memorable by a large procession of veteran soldiers and the military organizations the city, under the direction of Major-General Joseph B. Carr, chief marshal, and the singing of dedicatory and patriotic hymns by five hundred school children.

On that day, the sum of the subscriptions, and that appropriated, amounted to $50,538.81. The granite monument will, on its erection, be ninety-three feet high. On the sides of the lower stone-work will be four bronze bas-reliefs, five by six feet, representing infantry, artillery, cavalry, and naval battle-scenes; the naval one being a representation of the engagement between the “Monitor” and the “Merrimac.” Surmounting the column will be a bronze figure, “The Call to Arms,” thirteen feet high. 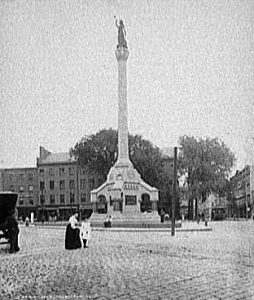