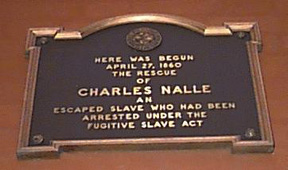 The rescue of Charles Nalle, an escaped slave from Virginia, arrested in Troy under the provisions of the Fugitive Slave Act, on Friday, April 27th, 1860, was intensely exciting and courageously accomplished. The indiscreet runaway having told the circumstances of his flight from his master’s plantation in October, 1858, a lawyer living at Sand Lake transmitted the information to the owner of the fugitive. The necessary papers for the arrest of Nalle, who had been hired as a coachman by Uri Gilbert, were place in the hands of J. L. Holmes, United States Deputy Marshal. The latter “executed the warrant and conducted the hand-cuffed man to the office of Miles Beach, United States Commissioner, on the second floor of the Mutual Bank Building, on the north-east corner of First and State streets. William Henry, a colored man, a friend of the prisoner, having heard of his arrest, secured the legal services of Martin I. Townsend, and went with him to the office of the United States Commissioner. Finding that a decision adverse to Nalle’s freedom had been rendered, Martin I. Townsend immediately drew the papers necessary to obtain a writ of habeas corpus to take the fugitive before the Hon. George Gould, a justice of the Supreme Court.

Report of the arrest attracted a crowd of interested citizens to the State Street sidewalk, on the south side of the Mutual Bank Building, – not a few being colored people. To acquaint them with the proceedings, William Henry began relating the particulars of the arrest and trial. He feelingly described how Nalle had

been handcuffed and brought there as a criminal, not for a crime but for his poverty in not owning his own body, and told how he had been condemned and placed in the hands of an officer to be conveyed, shackled and distressed, to a southern plantation where he would again be a defenseless victim of cruelty and despair. He asked his excited hearers whether they were willing to permit this innocent and intelligent man to be deprived of his rightful freedom and the blessings of liberty which they so highly enjoyed. Meanwhile the evidences of a hastily formed purpose to rescue the prisoner rapidly multiplied. A number of colored men pressed themselves into the thronged room where Nalle was waiting the service of the papers for a writ of habeas corpus. The State Street stairway and hall were filled with the eager friends of the fugitive. An old colored woman took a conspicuous position at the window overlooking State Street. The police of the city under the command of Timothy Quinn, chief of the force, were ordered to preserve the peace and to quell any disturbance about the building. At four o’clock, in the afternoon, the papers were served; Marshal Holmes being directed to bring the body of the prisoner before Judge Gould at his office, No. 39 Congress Street. While Chief Quinn was descending the stairs closely followed by Nalle, coatless and bare-headed, – Marshal Holmes walking on one side of him and Morgan S. Upham, deputy sheriff, on the other, – the old colored woman at the hall-window gave the preconcerted signal

“The scene became instantaneously one of great excitement,” as the Troy Daily Times related. “The 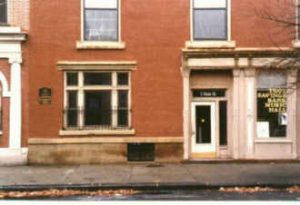 moment the officers reached the sidewalk, they were surrounded by the crowd, the inner-circle of which was composed of resolute colored men who at once began a vigorous attempt to rescue the prisoner. The city policemen were soon separated from the other officers, and left fighting promiscuously in the midst of a crowd perhaps of two thousand persons, who were swaying to and fro like billows, shouting, laughing, swearing, and fighting. Near the corner of State and First streets, Deputy Upham was torn from the prisoner, while Marshal Holmes was allowed by mistake to proceed with the prisoner as far as Congress Street. The rescuers, perceiving that the prisoner was not with Deputy Upham, overtook Marshal Holmes, who had him in charge, when the fight was renewed with much bitterness. At this juncture, the most conspicuous person was the old colored woman who was continually exclaiming, “Give us liberty or give us death,” and with vehement gesticulations urging on the rescuers. Here the scene became intensely exciting. Revolvers were drawn, knives brandished, colored women rushed into the thickest of the fray, the venerable Moll Pitcher of the occasion was fighting like a demon, and the friends of Nalle closing upon the officers, fearless and unterrified. The Deputy and Marshal, maimed by blows from clubs, chisels, and other weapons, were forced to abandon the prisoner; and shortly afterward Chief Quinn was also compelled to releases his hold upon Nalle. Then two picked men seized the prisoner, and ran down with him to the foot of Washington Street, where Nalle jumped upon the ferry-boat and was carried over to West Troy*. On his arrival on the opposite side of the river, Nalle started to run up Broadway, but was soon captured and taken up into the second story of a brick building, near the ferry dock. Ten minutes had hardly elapsed before the steam ferry-boat, which had been taken by storm, landed about three hundred of the rescuers at West Troy, among them the ubiquitous Moll Pitcher. The building was stoned, and the crowd, rushing up into the room under a fire from the revolvers of the West Troy officers, seized the prisoner and escaped with him from the building. Nalle, with his devoted friends, fled down Broadway, closely followed by the crowd, and when near the Arsenal wall, was placed in a wagon and driven off westward on the Shaker Road. Thus ended the rescue.”

Nalle, having been concealed for a time in the woods near Niskayuna, went then to Amsterdam, where he remained until May, when, by subscriptions of Uri Gilbert and other citizens of Troy, his freedom was purchased for $650, and he again returned to Troy.

* Note: The City of Watervliet was formerly known as West Troy.