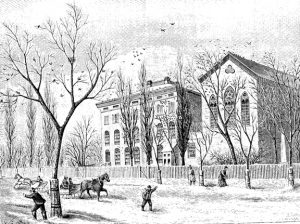 holds an important place in the history of many Irish immigrant families. Members of my family have been baptized, married and buried in and from that grand structure for at least the last 140 years beginning with the 1863 burial of my Irish great-great grandparents, Edward and Margaret (Ryan) Reardon’s baby daughter, up until the present day, with my sister and first cousin being parishioners. I hope you’ll travel down “memory lane” with me and learn about a place that wasand still may be a vital part of many Irish families of South Troy. 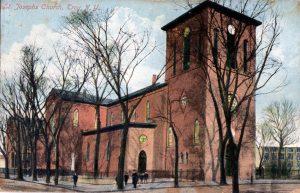 During the potato famine, as more and more Irish settled near the iron mills of South Troy, a new church needed to be built. In the spring of 1847, David Hathaweay, architect, was hired by Rev. Peter Havermans, pastor of St. Mary’s Church, to draw plans for the church.  Eight lots were secured from Judge Cushman at the corner of Third and Jackson streets. On May 21, 1847, Bishop John McClosky officiated at the laying of the cornerstone, and in that same month, men from the Nail Factory dug the excavation for the foundation of the church.

In February 1848, the original plans for St. Joseph’s had to be modified by the architect to cut cost because money was needed to build the Cathedral in Albany and to rebuild St. Peter’s Church which burned February 12, 1848. Interestingly, on Nov. 1, 1848, the first Mass was celebrated by Rev. Peter Havermans in the unfinished St. Joseph’s Church.

Finally, the magnificent church, built to seat 2,000 people, was completed six years later. The $100,000 price tag included such items as marble altar, mahogany pews, baptistery, soaring bell tower with mounted bells, magnificent choir loft and organ, and breathtaking Tiffany windows. A rectory was attached to the church, a large parish hall built in 1897 which housed four bowling lanes, a gymnasium, and an auditorium. This completed the parish campus. 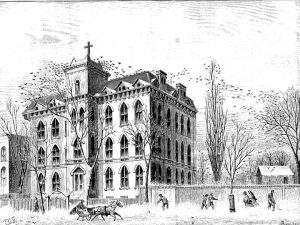 Once called the “Iron Workers Church”, St. Joseph’s was a proud symbol for the Irish community
a sign of their strong faith, hard work and dedication. In addition to attending Mass and receiving the sacraments, church-sponsored social organizations and functions would have been an essential way the parish helped my ancestors become acclimated to their new home. Parishioners socialized after Mass and vespers and a special services were held on Wednesday and Sunday evenings. St. Patrick’s Day brought parades, special Masses, and plenty of friendly celebration and drinking. Those who were Irish speakers sometimes used their native tongue and played tunes on the Irish flute.

My great-grandfather John Reardon and his brother, Patrick, would have attended the parish school which was organized in 1861 and initially staffed by seven Sisters of St. Joseph of Carondelet from St. Louis, Missouri. The Sisters arrived at the invitation of the pastor of St. Joseph’s parish, who informed the sisters that the “unruly youth of South Troy” were in need of their guidance. Subsequently, St. Joseph’s Academy was built in 1876, with one of the school buildings facing Third Street and the other on Monroe Street. For many years St. Joseph’s Academy maintained a high school, which was discontinued with the opening of Catholic Central High School in 1924.

The Sisters lived in a house at 445 Third Street until 1868 when they moved into St. Joseph’s Convent on Fourth Street at the head of Jackson Street. They operated a private school for girls until 1883. The Sisters, needing more space, later moved to the property of St. Joseph’s Seminary.

A maternity hospital was built east of the church on Fourth Street in 1923, on or near the site where the first convent had been built. When the maternity hospital closed in 1952, the building then served as a convent for the Sisters until 1963 when they moved to a new Provincial House in nearby Latham, N.Y. 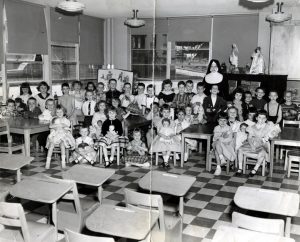 In September 1957, I was placed into the hands of Sister Immaculata, kindergarten teacher, just in time to enjoy the opening of the brand-new St. Joseph’s grade school, located just North of the parish hall at the corner of Fourth and Monroe Streets. Here, the Sisters continued their quest to give students a superior education often using methods involving corporal punishment!

In addition to learning reading, writing, and arithmetic at school, church was an integral part of the Catholic students’ lives. Attendance at Sunday and First Friday Masses, Tuesday Novenas, confession, May processions, Stations of the Cross, and Holy Day Masses was required. Families attended church and celebrated the students’ reception of First Holy Communion and Confirmation. Public school students received religious (CCD) instructions and received the sacraments as well.

Solemn occasions were also part of our family’s life as parishioners of St. Joseph’s. Before funeral homes were common, a black cloth was draped over the front door of the home of the deceased to indicate that a member of the household had died. The wake was held in the front room, with refreshments served in another area of the home. And we all know that the beer flowed freely at Irish wakes! A few of my Reardon ancestors’ obituaries state that the funerals were to begin at their residence and thence to St. Joseph’s Church where a requiem high mass will be sung.” So beginning with baptism and ending with funeral masses and prayers at burial, St. Joseph’s Church has been important to my family in South Troy for almost a century and a half.

Visiting South Troy today, it is obvious that much has changed in the area since my Irish ancestors’ early days in America. I find little evidence of many of the things they would have seen and encountered in their daily lives. But anyone who takes the time to open the heavy doors and enter St. Joseph’s Church will soon get the feeling that, inside that long-standing structure, time has stood still. It’s one of the few places we can visit and feel linked to a world long gone a world that our ancestors experienced so many years ago. 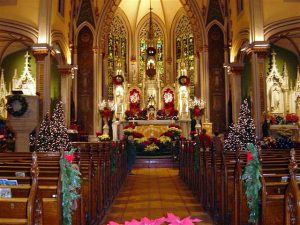