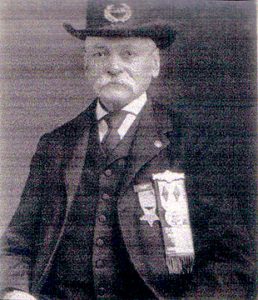 An Introduction by Cindy Bradley Hoffman

James A Reed was my gggrandfather
Born 3/12/1840 died 1/20/1914
He came to US from Dublin 1851
Father Michael Read/ Mother Jane Duff
He was naturalized in Troy NY
Lived in Lansingburgh Married Catherine Farrell 7/3/1864
I found diifferent spellings, but his enlistment papers for civil war states born as READE, the 1860 census states spelled Reid. All census after that is Reed.

I have been fooling around with genealogy since 1980, just curious, always asking who is who. On News Years Eve 2003, my husband already asleep, I went online and received a message from Tom Reed professor of law and history at Widener University. He said he had a copy of James’ civil war diary, and told me how he came to it. He was writing a book about the civil war and the IRON BRIGADE, and received a copy of the diary from a man in Buffalo NY, Jack Stole.

Well as it happens, this man’s wife is Mary Lou Reed Stole. She had the diary, from her father, who got it from my Great-grandmother Catherine Reed Scarry. Within days I received a copy along with all his pension records. James kept the diary for many years, listing children born, married, and a he kept detailed account of General Grant’s body lying in-state at the NYS Capital.

Another tidbit, while continuing my research, I found James and his mother and sister living at 787 4th Avenue in Lansingburgh in the 1860 census. His sister and husband lived in one flat, she was Anne Reed O’Connor, married to Patrick O’Connor. In a letter he states “you should see Anne’s little one”. Anne died in 1868 and Patrick remarried.

My parents, Ann Daley Bradley and John J (Herb) Bradley’s first house was at 787 4th Avenue. My mom was from the Burgh, and always talked about buying the house from Judge and Kit O’Connor. She never knew that there was a connection.

I live in Averill Park grew up in Lansingburgh and then South Troy went to CCHS and HVCC. I am a RN, married with 3 grown children. Hope to pass the bug on at least to one of them.
Thanks you for the opportunity to share this with the Troy Irish Genealogy Society. 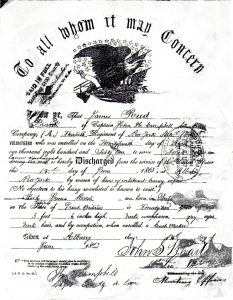 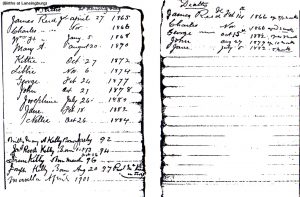 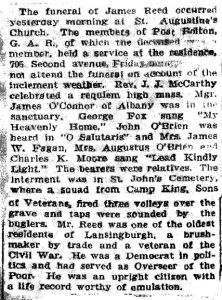