The following letters were sent from County Kildare, Ireland, by widow Anne Farrell Walsh, who was born in the town of Clane, to her daughter Catherine (Mrs. Michael Dunn) in Troy, New York, and son Oliver in Greenwich, Connecticut. A second daughter, Rose Walsh, who had married a Clinton 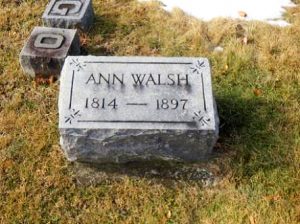 (also from Kildare), had lived in Troy but had died before Anne wrote these letters. Anne had several other children who, so far as is known, remained in Kildare.

Anne Walsh was the great great grandmother of TIGS member Mary Lee Dunn from Maine, who collected these letters from a cousin, Kathleen Dunn O’Connor, in Troy in the 1970’s. She edited them lightly and offered them to the Clane Local History Group in Kildare for their journal “Coiseanna.” The journal, by the way, is named for a local hillock where in 1798 one of the first battles of the Irish rebellion took place.

The letters discuss the doings of relatives and neighbors, how tough life was then in Kildare, how she misses her emigrant family, and some aspects of the national scene. They include, for instance, mentions of the Land League, Parnell the politician, evictions, the weather, and so forth. Anne eventually emigrated to Troy with her son William and lived in South Troy with Michael and Catherine for about a decade before her death in 1897; she is buried in St. Mary’s Cemetery in Troy. Her husband’s name was Walter Walsh but little is known about him.

The following article on the letters was published in the 2014 issue of Coiseanna, the journal of the Clane Local History Group in County Kildare and is reprinted with the Group’s permission.