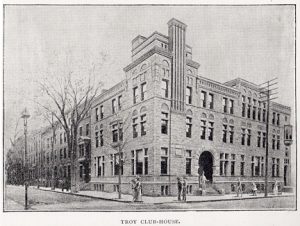 A number of influential and wealthy citizens, having projected a social society, associated themselves by a certificate of incorporation on November 27th , 1867, under the name of The Troy Club, having for its first board of managers, Jonas C. Heartt, John A. Griswold, D. Thomas Vail, E. Thompson Gale, Joseph M. Warren, George H. Cramer, Uri Gilbert, William F. Burden, Joseph W. Fuller, Samuel M. Vail, John Hobart Warren, Miles Beach, Moses C. Green, G. Parish Ogden, and William A. Shepard. On December 14th, the club purchased the large three-story brick house n the north-west corner of Congress and Second streets, and having fitted it with the conveniences and appointments of a modern club-house, occupied it on January 20th, 1868.

Having determined to erect a more desirable building, the club purchased, on July 12th, 1887, the property on the south-west corner of First and Congress streets, for $23.000. The lot, fifty by one hundred and thirty feet, was then partly occupied by a two-story brick building fronting on First Street, built early in the century by Nicholas Schuyler, the first clerk of Rensselaer County, who, on April 27th, 1813, advertised the property for sale:

“N. Schuyler offers for sale his house and lot, with all the buildings thereon, containing a fine garden of made soil, in which are a variety of fine fruit and shrubbery; also a rich asparagus bed of 144 square feet. The corner of First and Congress streets, opposite the Public Square.”

In the fall of 1887, the erection of the handsome club-house was begun. The building was completed and furnished in the fall of 1888 and occupied on November 29th. Its architecture is modern Romanesque. The agreeable color of the Long Meadow sandstone delightfully enhances the general effectiveness of the masonry. The officers in 1889 were Walter P. Warren, president; James A. Eddy, vice-president; John Clatworthy, secretary; and Daniel W. Ford, treasurer. The number of resident members, in 1889 was 157; non-resident, 56.

Note 1: The picture above is from page 258 of the book, Troy’s 100 Years. Sadly this beautiful building was destroyed by fire a number of years ago.

Note 2: Am always intrigued by the “Burden” name. Most of my Irish ancestors (McGrath-O’Connor-McCormick) worked n the Burden Iron Mills and I lived on Burden Avenue near the mills for over thirty years. One William F. Burden is listed in the book with a date of death of December 7th, 1867 so I don’t know if he was the one mentioned as being one of the first board of managers for the Troy Club or if it was his son.

Note 3: I remember reading an obit in the New York Times in the early 1970’s for a William Burden, born in Troy, who died in New York City.

Note 4: The Burden Mansion in Troy was located on a large tract of land bordered by Morrison Avenue, Burden Avenue and Mill Street. Later it was used as a Franciscan monastery and then left vacant when the new monastery was built on the property. As a youth I remember roaming through the vacant mansion prior to its demolition. The beautiful sweeping marble staircase was still in place. The property now is the site of office buildings for Hudson Valley Community College.