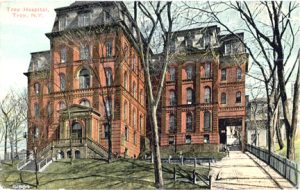 between the years 1845 and 1848, compelled the city authorities to erect temporary buildings for their care and treatment. Sometimes as many as two hundred sick persons were thus sheltered. The afflicted people were mostly Roman Catholics, and the Rev. Peter Havermans daily visited and ministered unto them the means of physical relief and spiritual comfort. Their distressing circumstances suggested to him the need of a city hospital, and he undertook the collection of funds with which to erect one.

His efforts were successful, and a site was obtained on south-west corner of Fifth and Washington streets. On Wednesday afternoon, August 15th, 1848, the corner-stone of the Troy Hospital was laid by General John E. Wool of the United States Army. The four-story brick building, when completed in 1850, was used for the purposes contemplated; a number of Sisters of Charity taking charge of the institution.

After the construction of the Union Railroad, the site became unsuitable for a hospital. In April, 1866, the property of Ebenezer Prescott, on the east side of Eighth Street, at the head of Fulton Street, was purchased by the managers o 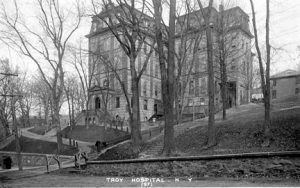 f the Troy Hospital, for the site of a new building. The corner-stone of the four-story brick structure was laid on Sunday afternoon, June 28th, 1868, by the Right Rev. J. J. Conroy, bishop of Albany. In the fall of 1869, the old hospital was vacated and the new one occupied. The institution is (was) still in charge of the Sisters of Charity, who latterly have had the care of as many as eight hundred patients within a year. The attendance, appointments, and charges are in every way satisfactory and advantageous.

Note 2: The Troy Hospital is mentioned in a number of the death notices for my family members.

Note 3: The Troy Hospital building on Eighth Street later became the home of Catholic Central High School until about 1953. I started my Freshman year there in 1952 and later that year or early in 1953, the school relocated to the Cluett and Peabody laboratory building in Lansingburgh where it remains today.

Note 4: The former Troy Hospital and Catholic Central High building is now part of the Rensselaer Polytechnic Institute campus. On the 45th reunion of the Class of 1956 in 2001, we had a cocktail party there and a tour of our old school building.

Note 5: Rev. Peter Havermans was the first pastor of St. Mary’s Church in Troy from it’s opening in 1843. When this book was published in 1891, he was still the pastor.