My family’s census records reveal that often both single and married men and women, regardless of age, lived at home with their parents. Because three generations sometimes lived under the same roof, it was important that the young members contribute to the family income. Many of my female ancestors helped supplement the family income by working in Troy’s bustling collar industry. 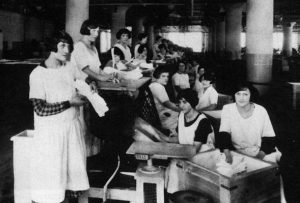 By the late 1860’s Troy was the nation’s foremost producer of detachable collars as a result of its invention by a Troy resident in 1827. Hannah Lord Montague, who lived at 139 Third Street, became tired of washing her husband’s shirts multiple times to get rid of the “ring around the collar.” She cut the collars off, washed them separately, and tied them back on the shirts with string. Hannah’s detachable collar set a trend for businessmen and working women all across America. Local entrepreneurs began manufacturing the collars, branching out into many styles. The detachable collar and cuffs were worn well into the 1930’s.

The small operations that started making Hannah’s collars in Troy soon grew into large industrial operations as Troy became the center of the collar-making industry in the United States. This industry provided employment for thousands of working women, most of whom were Irish. To its residents, Troy was and still is called, “ Collar City.” 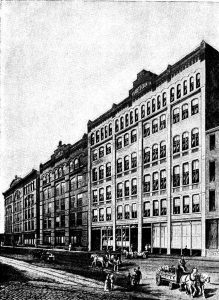 Collar women labored for long hours under trying conditions. Collar sewers—banders, runners, and turners—stitched collars by hand or machine, working at home or in factories. After the collars were made, they next passed into the hands of laundresses.

Laundresses—washers, starchers, and ironers—prepared newly manufactured collars for sale to retailers. They toiled in independently owned laundries or in the laundering departments of large collar factories. Laundresses’ working conditions were especially harsh. Washers worked with boiling water, while starchers had to contend with caustic starches and potentially dangerous detergents, and ironers handled hot, heavy irons.

By the 1860’s about 3700 women worked in collar factories and shops and hundreds, perhaps thousands, stitched collars in homes in Troy and the surrounding communities. The women often left school at sixteen to go to work. By the 1880s collar factories employed over 8,000 workers and thousands of home workers.

My grandmother, Margaret Reardon, was a collar worker until she married and began her family. And her husband Edward Duffy’s three sisters, Margaret, Kate and Mary, were listed as collar shop workers in the 1900 census. It was fortunate that an industry that employed so many women was located in close proximity to the iron mills of Troy.

Source on collar workers was
Working Women of Collar City, Gender, Class and Community in Troy, 1864-86
by Carole Turbin. University of Illinois Press. 1992.