Escaping the intolerable conditions of Ireland brought millions of Irish immigrants to America. Once on U.S. soil, these newcomers were faced with the problem of finding work – a problem that brought both my ancestors Charles Duffy and Edward Reardon, along with their families, to the iron mills of South Troy.

When Charles and Edward lived in Ireland, they most likely made their living from the land. At the time they left their homeland, the Industrial Revolution had not yet reached Ireland the way it had in Britain and the United States, bringing new factory and mill jobs. Charles, Edward and thousands of other newly arrived Irish immigrants, had to learn new skills in order to survive.

In the 1860s, Troy was an important producer of the nation’s iron and iron products. In addition to the four largest iron mills in the country, 14 smaller iron foundries molded a wide variety of iron products like stoves, stove patterns, ranges, bells, nails and wheels, including the J. Griswold Rolling Mill Company, Rensselaer Iron Works, Clinton Iron Foundry, Bessemer Steel Works and the Albany Iron Works

Soon after he arrived in America in 1847, Charles Duffy migrated to Troy and worked in the iron industry for a company that manufactured merchant iron spikes and horse shoes. From 1855 until his death in 1859, he was a laborer living in Ward 6 near the Albany Iron Works, formerly the Albany Nail Factory. The Albany Iron Works’ campus consisted of a company-sponsored public hall, a library and reading room, and a chapel. 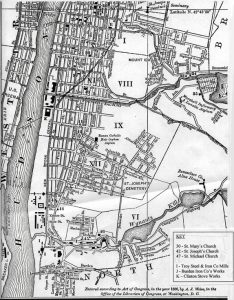 Charles was employed at the Albany Iron Works at the time of his death. The record states he died at the Nail Factory—the cause was listed as diseased heart. (Obviously the recorder used the former name of Albany Iron Works in reporting the death.) We are unsure if he died on the job or in a separate building. An examination of Troy’s death records at that time revealed numerous deaths occurred at the Nail Factory caused by various diseases. We conclude, therefore, that a medical facility was located on the premises.

After leaving Ireland for American shores in 1860, Edward Reardon also settled near Iron mills in a southern ward of Troy—Ward 9, located a mile or two north of Charles Duffy’s Ward 6. Since census records list him as an ironworker, he probably worked at one of several large iron plants which lined the Hudson River in South Troy. Nearby were Clinton Stove Foundries at Second and Ida Streets, Fuller, Warren and Company at Monroe and RiverStreets, and the Rensselaer Iron Worksat River Street at the foot of Adams Street.

Iron workers usually did not have a steady income during each 12-month period. Between labor strikes and the iron mills often closing for three months during the winter, it must have been challenging to make ends meet. Since Edward was able to purchase a home 11 years after moving to Troy, we must assume work was fairly steady and wages were relatively high.

Edward’s son, John (my great-grandfather), followed in his father’s footsteps as a skilled iron worker. He was employed as a molder at Ludlow Valve Manufacturing Company, maker of fire hydrants and valves, located on the former site of the Rensselaer Iron Works. Molding required a long apprenticeship of between four and seven years, great strength, and substantial skill. Also, the molder was allowed to hire a helper.

Although the pay was relatively high, the profession was not easy. John was engaged in the hot, dangerous, and delicate craft of casting molten pig-iron into hydrants and valves which had to be completed while the metal was molten. Sand or loam of the exact proper consistency and wetness had to be prepared; the wood or cast iron patterns (prepared by the pattern-maker) had to be filled with sand and rammed strenuously to make a mold; the mold had to be rapped carefully to remove the pattern without breaking the mold; and the molten iron had to be poured quickly and evenly into the mold. A mistake at any stage could render the mold unusable and entail the loss of several days’ labor. 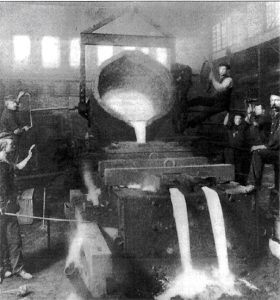 The temperature at the foundry was well over 100° F., and John would have worked multiple pourings each day with the molten metal. The work was so strenuous that it could not be done continuously during the ten-hour workday. Iron workers usually took rest breaks between pourings, sometimes visiting the neighborhood saloon for fortification and comradely relaxation.

Older family members report that my great-grandfather went to work at six o’clock in the morning and came home at six o’clock at night, six days a week, Monday through Saturday. During hot summer days, John’s wife would have a pitcher of ice cold lemonade ready for him when he got home from work, and he would drink the whole pitcher by himself.

The iron factories were not the only work in town. Our male ancestors in Troy held a variety of positions outside of the iron industry such as saloon keeper, blacksmith, brush maker, news dealer, policeman, priest, shoemaker, railroad clerk, and wagon driver.

Source on the iron workers is
Worker City, Company Town: Iron and Cotton-Worker Protest in Troy and Cohoes, NY 1855-84,
by Daniel Walkowitz. 1978. University of Illinois Press.