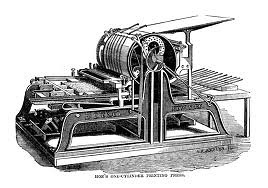 An exhibit at The Rensselaer County Historical Society, “Black and White and Read All over: Newspapering in Rensselaer County, 1790 to the Present” was held from September 1994 to June 1995.

As a result of that exhibit, a pamphlet was developed which chronicled the 240 different

newspapers that were published in Rensselaer County starting in 1787 and continuing up to the present day.

These various newspapers are one of the best ways to document any given community overtime and serve as a valuable resource for genealogy researchers to track down information on deaths, marriages and other family events that are available nowhere else. The newspapers prior to 1880 are especially valuable to researchers as they predate the New York State Law on centralized reporting of death and marriage records.

This TIGS resource developed from the RCHS pamphlet shows an alphabetical listing of the 240 Rensselaer County Newspapers and a chronological list of the papers with information on the dates of publication, successor newspapers, names of publishers, editors, etc.

To make this resource more useful to researchers, the TIGS data base identifies those newspapers that are available on microfilm or hard copy at the Troy Library.

In addition to the microfilm holdings of the Troy Library, copies of these Rensselaer County newspapers may be available

The following link will take you to the State Library site where you can click on Rensselaer County and identify what newspapers are available and who has microfilm or hard copies available. Microfilm newspaper records from the State Library may be obtained through an inter-library loan:

Note 1: While the pamphlet mentions the 1790 date, there were two newspapers listed prior to that date.